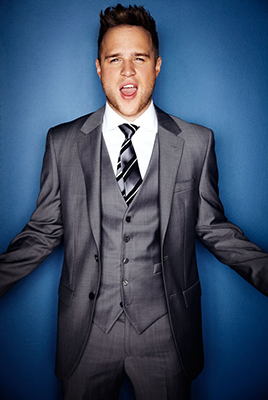 Oliver Stanley “Olly” Murs (born 14 May 1984) is an English singer-songwriter, musician and television presenter. Murs rose to fame after finishing as the runner-up in the sixth series of The X Factor in 2009. He is currently signed to Epic Records in the United Kingdom, Columbia Records in the United States, and Syco Music.
In late August 2010, Murs released his debut single “Please Don’t Let Me Go”, which debuted at number one on the UK Singles Charts, becoming Murs’ s first number one single after releasing “You Are Not Alone” with the other series 6 finalists. “Please Don’t Let Me Go” received a Gold certification by the BPI. He released his second single from his debut album “Thinking of Me” which charted at number four on the UK Singles Charts, however the single also got a Silver certification by the BPI. “Heart Skips a Beat” was released and became his second number-one hit. Murs’ first single from his follow up album In Case You Didn’t Know, “Dance with Me Tonight”, became his third to reach number one.

In November 2010, Murs released his self-titled debut album, which entered the UK Albums Chart at number two, with the biggest week one album sales for a debut album in 2010, with over 108,000 albums sold. The album went on to sell over 600,000 copies, and was certificated double platinum by the BPI. In November 2011, Murs released his second album, In Case You Didn’t Know. The album entered the charts at number one, and has spawned two number one singles. To date, Murs has sold over 5 million records worldwide. In May 2011, it was announced that Murs would return to The X Factor to co-present spin-off show The Xtra Factor with Caroline Flack. His autobiography, Happy Days, was published on 11 October 2012. In November 2012 Murs released his third album Right Place Right Time and so far has released two singles from it, the first, “Troublemaker” which became his fourth number one and the second “Army of Two” which reached number twelve.