In Case You Didn’t Know 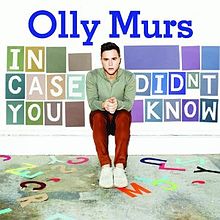 In Case You Didn’t Know is the second studio album by English singer-songwriter Olly Murs, released on 25 November 2011, through Epic Records. The album’s release was preceded by the number-one singles “Heart Skips a Beat” on 19 August 2011, and “Dance with Me Tonight”, on 20 November 2011. The album’s track listing was confirmed by Digital Spy on 7 October 2011.